Have you ever noticed the somewhat cryptic symbol that often appeared on Walt Disney’s ties? While some interesting theories have been shared by some over the years, the symbol is actually the logo of the Smoke Tree Ranch private resort community in Palm Springs, California. 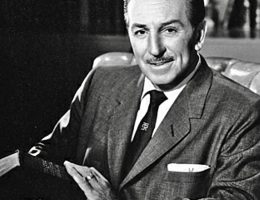 Documenting the Construction of the Jungle Cruise

Since this feels a lot like “Jungle Cruise Month” - what better time to share some cool Jungle Cruise artifacts from the very earliest days of the attraction. 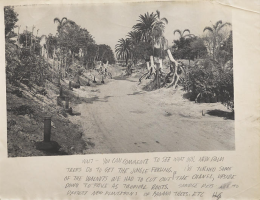 Read more Documenting the Construction of the Jungle Cruise

Street, U.S.A. Located along the southeast block of Main Street near the Cinema, the shop was leased by the Connecticut-based Yale and Towne Co., one of the oldest lock companies in the world. 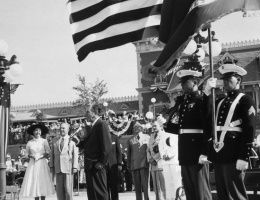 The Other Opening Day Scramble

The days and weeks leading up to the opening of Disneyland on July 15, 1955 consisted of a mad scramble to construct, paint and decorate the park before its television debut. At the same time, another massive operation was underway at the park - the preparation for one of the biggest live television events in the history of the relatively new medium.

n this day in 1955, Walt Disney and his wife, Lillian, celebrated their 30th wedding anniversary by hosting a party at Disneyland just days before its grand opening.

On this day in 1894, Disney Legend Joe Fowler was born in Lewiston, Maine. The retired Navy Admiral was tapped by Walt Disney to oversee the construction of Disneyland in 1954. In recognition of Joe’s effectiveness and positive outlook, he became affectionately known as “Can-Do Joe.”

On this day in 1955, Walt Disney hosted a Fourth of July picnic for a select group of Disney Studios employees and their families at Disneyland, just days before its grand opening on July 17, 1955. Those lucky enough to attend would be among the very first to ride some of the attractions and see Walt’s highly anticipated project.

On this day in 1908, John Hench - Disney’s Renaissance artist - was born in Cedar Rapids, Iowa. In his legendary 64 year career with the Walt Disney Company, John left his mark in films, theme parks, and hotels.

Illinois. Ryman had an illustrious Disney career and cemented his legacy as the artist Walt Disney turned to when he needed someone to translate his dreams of Disneyland onto paper so his brother, Roy, could attract the financing required to build the park. 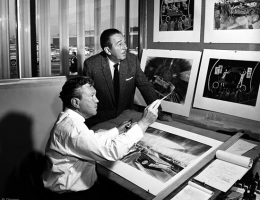